In the days before recording changed music forever, performance was ubiquitous. Songs were kept alive by people whose performances maintained, interpreted and adapted the music, yet despite the leaky boat of human memory, the essentials were kept surprisingly constant as they were passed from singer to singer down the generations.

When music was written down, the coded instructions, note pitches, intervals, pace (Andantino, Prestissimo) became an idealised fixed point of reference. When recording became established with the invention of the phonograph, recorded performances of music became the de facto reference point(s) for all other renditions. The song was now tied down, and wandering too far from this location would give the academic cause to make a judgement that the song no longer remained the same.

Now, bringing this into the modern age, we observe fragmentation happening as recorded music moves once more away from “permanent” versions and into multiple. But remixes, mashups both licit and illicit, cover versions and reduxes all rely on the reference back to an original, i.e. a first finished, mixed and mastered recording. Even the rough demo of the song refers retrospectively to a future “perfect version”.

Recordings have done much to spread appreciation of music, to advance cultural exchange and understanding, but placing recordings at the top of the musical (financial) tree has had a major side effect. The invention of the camera caused the once widespread skill of drawing to practically disappear in the broad population, and similarly, recording and playback devices have removed the commonplace playing of instruments and singing together (there is historical evidence for this.) We have diminished the role of music and our collective sense of it by coming to rely on recordings rather than performances as the musical fountain from which we drink.

Recordings are really just snapshots of a particular location, just a single view from the musical hill. Shifting your feet a couple of inches, moving your eyes and ears in another direction gives you a different experience of the same location. Look, there’s a golden eagle, which we wouldn’t have seen if we had kept looking at the sunset. 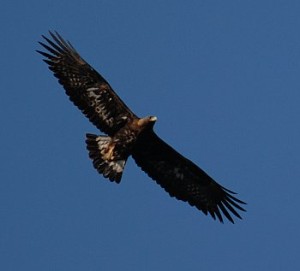 When we started Rise and Shine, our songwriting show, by writing and recording songs about the news along with our audience, we were letting people into the act of creation. Creative improvisation, songwriting, arrangement and production are fascinating to many people, but the strange thing that happened to me was during this time was that my concept of the centre of music shifted.

Essentially, our live performances were producing the songs, but because we were simultanously broadcasting interactively and recording, the act of writing was captured along with the end results. It made me think about where the song really lives. I felt that adding broadcast to the normally closeted processes of writing and recording restored the energy, and returned music to its natural communal function.

As I produced and worked each song into its “finished” version, I recalled thousands of live performances where a combination of practice, musical discipline and being alive to the possibilities of the moment had produced sizzling, hair-raising, inspirational performances which communicating directly to the audience had a value which words struggle to express.

One of my favourite ever music quotes is from the Incredible String Band:

Music is an energy which runs from the beginning of time to the end of time, and musicians are lucky enough to get to play it

People who follow gurus and teachers call this raised level of contact “transmission” – the transfer which happens in the presence of the master. Listening to a fiddle player down the pub gives you something of this, and watching the best surround-sound video recording does not.

However much you appreciate a wonderful recording, you know that any applause you give will fall on ears deaf to your reaction. In live performance, our responses are registered, responded to, incorporated. Just picture the reactions of those around you if you were to clap and cheer after hearing one of your favourite tracks on an iPod!

Transmission is a two-way process, requiring the ears and eyes of the performer as well as the audience. The simple internet broadcast of spontaneous performance as it gave birth to repeatable musical structure, aka songwriting, did achieve a more elevated state of communication than simple playback to a largely passive audience.

Experimenting with the Rise and Shine show, writing this blog, and reading, has really set me thinking about how music works, and what it is that we are seeking from it on the internet, what it is we are likely to get, and beyond that, the value of writing and recording songs and music in general.

There is more to this train of thought to come in my next post.

One Reply to “Performance”