I read this excellent and frank interview with Quincy Jones, which has startled a few. Some questioned the veracity of some of this answers but it all rings true to me. A long time Quincy fan, since I heard his beautiful arrangements on Paul Simon’s 1973 album ‘There Goes Rhymin’ Simon’ – I particularly love ‘American Tune’ – he has by now become one of music’s unabashed greats.

Is there innovation happening in modern pop music?
Hell no. It’s just loops, beats, rhymes and hooks. What is there for me to learn from that? There ain’t no fucking songs. The song is the power; the singer is the messenger. The greatest singer in the world cannot save a bad song. I learned that 50 years ago, and it’s the single greatest lesson I ever learned as a producer. If you don’t have a great song, it doesn’t matter what else you put around it.

Still discoveries proliferate. In 2016 the BBC staged a prom concert as a tribute to the man, and that is where I chanced upon Jacob Collier, a beautiful talent who Quincy picked up early and produced.

The first time I heard this, the hairs on my neck went up, and my eyes filled with tears. Not for sadness, but for beauty. I couldn’t even begin to grasp what the music was doing, how it was formed, as its immediate effect was overwhelming. If you aren’t particularly romantic, or a lover of jazz and soul, it may leave you cold. But if you do appreciate jazz, soul, and great musical talent, and you don’t yet know this song, ‘In The Real Early Morning’, prepare to be astounded.

A song called “Old”. I’ve coined a new musical genre, as you do, for this song – Plantagenet. It seemed both timely with the rescuing of Richard III from his carpark grave in Leicester and appropriate for this muse on mortality. The sounds of the clock chiming and the dog are from my childhood home.

The line “Old, I don’t wanna be, lying awake scared of burglary” sometimes gets misheard as “scared of buggery”.

I don’t mind this addition of sexual paranoia, though it wasn’t intended. The listener’s mind completes the work. It’s a classic theme, one of the seven songs in rock ‘n’ roll – the break up, lovers parting in glorious colour, and of course, in tragic black and white. For some reason I’ve always written these songs (!) but I wrote very my best break up song not in a space of suffering, anger, denial or sadness, but in contemplation of what happens, that recurring cycle of promises made in passion, which prove to be no more than chimeras.

“Wouldn’t Do That” has a double meaning which runs all the way through it, and while I don’t want in this blog to be my own literary critic, I’m happy to point out the obvious: Is the promise made not to leave, or once gone, not to look back? is the question I was asking, and it’s one which is poignant to this day.

I’m quite proud of this song, because the major/minor chord progression expresses the bitter-sweet idea I was trying to articulate before I even began to say it. I quite naturally fell into singing a falsetto, and played the most soulful harmonica I’ve ever managed, which you can hear in this demo.

What are these worlds we live in?
Doing our thing separately
Surely we must have forgiven each other
Wasn’t our loving for real?

Some people have all the luck, all the talent and we are in awe of their creative majesty. Quincy Jones is such a man. His productions are big, sultry, sensual and funky, uplifting, sweet and moving. He imbues his superior musical energy like magic upon everything he touches.

Best known for producing Michael Jackson’s Thriller and the African famine fundraiser We Are The World his modus operandum seems to be working with great joy, famously putting a sign on the studio entrance: “Check your ego at the door”.

As well as producing one of the biggest albums of all time, he is a direct and much-sampled inspiration for Trip-Hop, that downtempo, chilled moody genre which emerged in the 1990s, which draws on a far more subtle and intimate musicality than his later Hollywood successes.

I loved Les Nuits by Nightmares on Wax since I first heard its spine-tingling intro and it didn’t take me too long to trace the roots back to Quincy. Listen to the original and then to the music which is inspired by it.

If I could take one thing from Quincy and transplant it into myself, it would be his string arrangements. American Tune by Paul Simon has a haunting, classical chord progression which is elevated by Quincy’s understated strings, turning his muse on the moral collapse of his nation into something far more meaningful than just a protest song.

It’s easier said than done, coping with rejection. Whether you sweat metaphorical blood over a song, or it comes as easily as rain in London, you feel a parental attachment. No matter how tough you are, as a writer, you want your songs to be listened to and appreciated. It may also be that the inspiration for the song is deeply personal, in which case, the rejection is more likely to sting like a lover’s scorn. You want your song to be loved and have a good life, and it hurts you when people hate your creations, or worse, are indifferent to them. 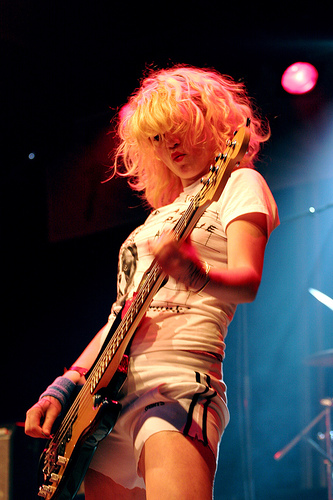 But in actuality, it can be far worse than simple rejection. One of the unfortunate by-products of the ludicrous marketing which corporate commerce typically creates to sell music is the public perception that artists must all be big-headed egomaniacs who therefore deserve to be put down. Articulating antipathy is one thing, but it often goes much further, encouraging the kind of personal cruelty by which music journalists make their names and sell newspapers. To put yourself on stage is to attract heckling and derision, simply on the basis of taste. I often think that musicians are no more than bus drivers – they sing a song which takes you on a journey. If you get on the wrong bus, you don’t attack the bus driver – so why character assassinate a musician, just because you don’t like his music?

My ambition before I turned 33 was to front my own band and have hits, so I gigged several times a month and spent the rest of the time writing and rehearsing. Paying your dues, they call it, and it’s tough learning to maintain this activity and at the same time deal with the rough and tumble of the business, the arseholes and the idiots and the careless comments, especially when those careless idiot arseholes are yourself. Abuse however can often teach you more than adulation, if you can learn not to take it personally. I rapidly adjusted to the reality that my audience wasn’t everyone elses, but it was nonetheless there, and that taste was highly variable even within genres, and I had enough confidence and self-belief to keep on going.

At a gig in Camden’s Dublin Castle, I met a bleached-blonde rock chick who told me she was an agent. She approached me in the golden ten minutes after we came off stage and enthused about the band and our songs. Come and see me, she said, I will get you gigs. So, I agreed to drop by her office in Tottenham Court Road with demo tape.

A few days later, I grabbed a cassette and recorded three tracks I was working on – a couple of up-tempo strummy guitar numbers, and a more experimental slow soul song, in which I sang falsetto. I was pretty pleased with the production on this 4 track demo, having dropped into a session in a professional studio and heard it over the monitors, where it sounded better than the £100 per hour track my friend was producing, to his mild embarassment.

Rock chick greeted me cordially, invited me to sit down, lit a cigarette, and we chatted about the band and the music business. I pulled the tape out of my pocket and she stuck it on the office sound system. First up was the slow song – I figured she’d seen the band, she knew the fast ones, give her something to show we had more in the bag that pub floor fillers. Within 30 seconds, she turned to me and said,

I really hate this kind of shit. It isn’t you, though, is it? Is your stuff on the other side?

To say I was surprised was an understatement. I made goldfish movements with my mouth but no words emerged. I said that it was me, and started to defend the song – but met her cold eyes and the words just dried up. As I made my excuses and left after five deeply uncomfortable minutes of pointless small talk, I had the presence of mind to take the tape with me, but my skin was burning, my child slapped, beaten, humiliated and sent home.

Over the next few days, it haunted me. Why the change? I expected her to at least listen. It was brutal, complete and utter instant rejection, so completely the opposite of her reception a few days earlier. Maybe she was out for blood – some people get their kicks from doing that kind of thing. Maybe she just genuinely hated that song, or my singing. I comforted myself that if she didn’t like it, she certainly wouldn’t like a great swathe of our material, and I soon stopped worrying about it, and found another agent – but I didn’t forget it.

Several years later, I listened once again to the song, recalled the hard-bitten woman, and I immediately knew exactly why she had hated the song. It is introverted, conceptual, eccentrically stylised. It has weird poetry in it. It’s about vulnerability, it was dealing with the romantic failure and emotional exposure of a disastrous love affair, and difficult to grasp, inconclusive personal lessons, which she certainly was not at all interested in.

She didn’t want any of that arty soul shit – she wanted unsubtle masculinity, bravado, a blast of pop rock energy, just like she’d seen us perform – no wonder she couldn’t even listen to more than a minute of it!

As the song says,

So do you think they’d adore you
If you were more organised?
Well learn this lesson now, then
This cannot be summarised…